Tea and a biscuit 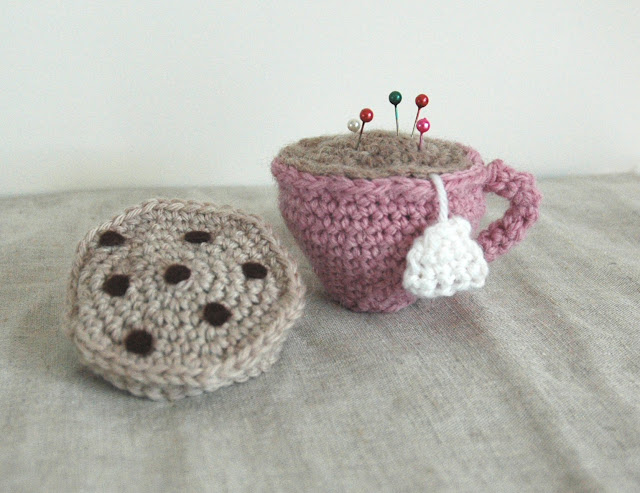 Here is my latest project, a teacup pincushion and cookie needlecase.


I first saw the teacup pincushion from a Lion Brand free pattern, but I didn’t like the shape, so I altered the pattern to make it my own. I kept the teabag idea, again altering just enough, and I’d like to share it with you here.
But I so love to have a cookie when I’m sipping my tea, so I came up with the cookie needlecase pattern. Wanna see how I did it? 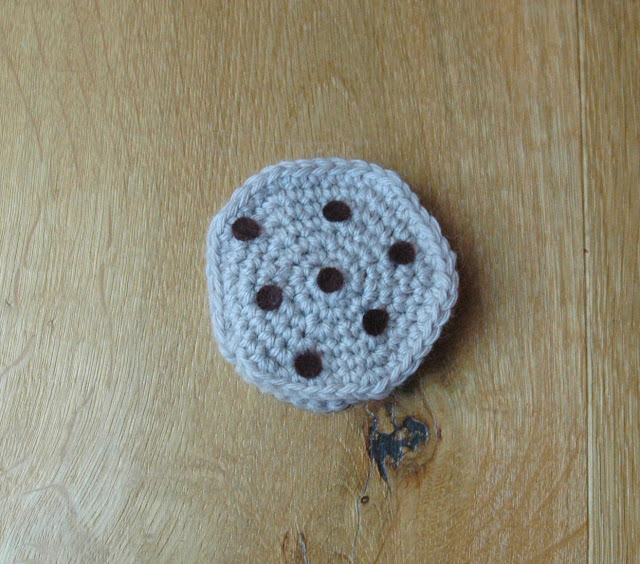 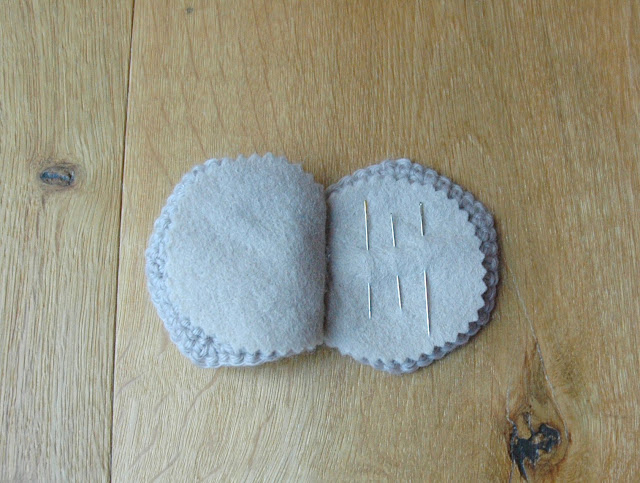 Make two circles. I used a biscuit-coloured DK yarn and 4mm hook. You will also need matching felt, a dark brown felt for the chocolate chips, and thread or embroidery floss to stitch on the inside of the needlecase.
UK terms used here. This pattern works in a continuous round, so find a stitch marker so you don’t lose track...


Fasten off and weave in ends. 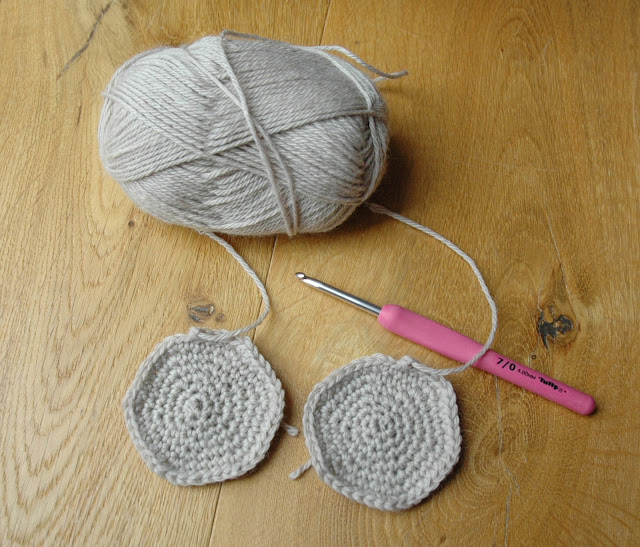 Next, fold the felt in half, and draw on a circle that measures just a bit smaller than your cookie circles (I used an old magnetic pin holder, which was just the right size – see in the photo below). Draw the circle so that one edge is on the fold – this will be the join of the two cookie halves. 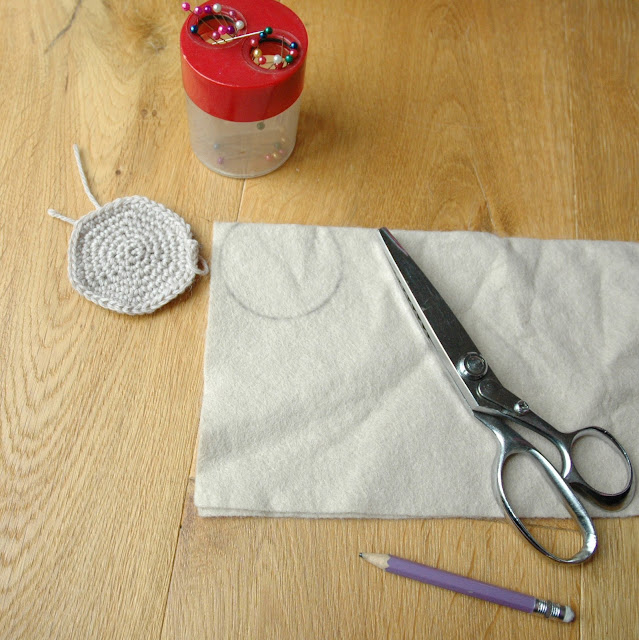 Cut around the felt, leaving the folded edge. I used pinking shears for a zigzag edging. 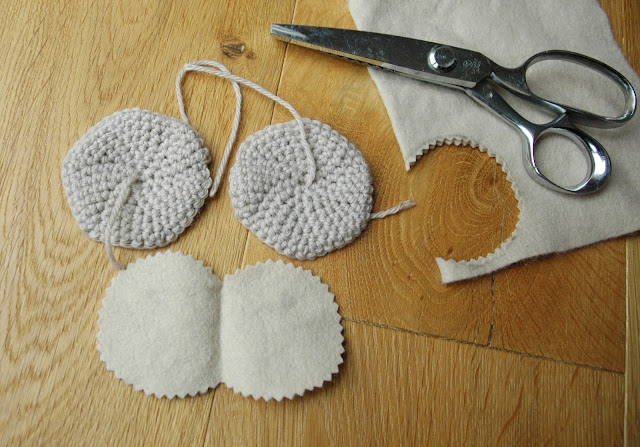 Stitch the two cookie halves together with a length of the yarn, then open the needlecase and stitch on the felt with thread.
Finally, use a hole punch to cut wee chocolate chip circles out of the dark brown felt. I found that gluing them on was the easiest method.

Now, the cup of tea to go with that cookie: 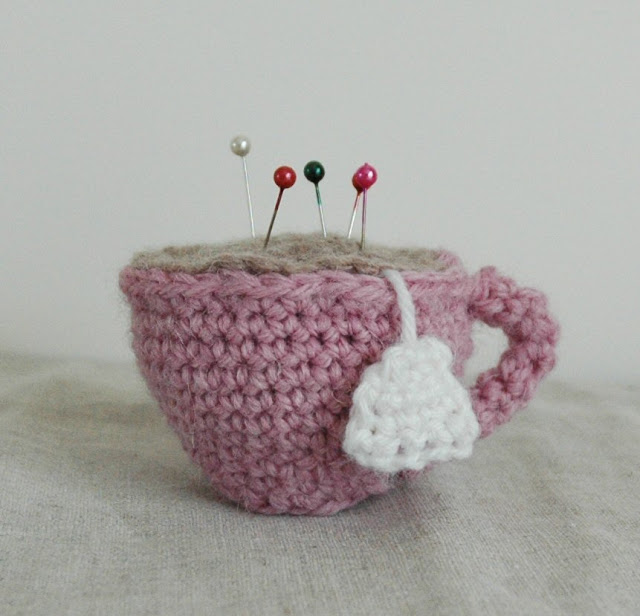 Here you need a DK yarn for the cup, a tiny bit of tea-coloured yarn, an even teenier bit of white for the teabag, some pellets for the base of the pincushion to keep it steady, and some toy stuffing to fill the rest.
For the teacup:

With the cup yarn, ch2


Fasten off and weave in ends.


Teacup handle:
This is a bit fiddly because you’re working in a tiny circle. Have patience, it will all be over very quickly!


Round 2: dc in each st around (4st)
Continue repeating Round 2 until the handle measures about 5cm/2in long. Fasten off, but leave a long end for sewing the handle to the cup.

Tea:
Here I like to start with a magic ring because I don’t like a small hole in the top of the pincushion showing the stuffing beneath. But if you find magic rings too tricky, don’t worry, simply ch2 and work the first 6dc in the first ch.


Fasten off and weave in ends.
Here’s what you should have 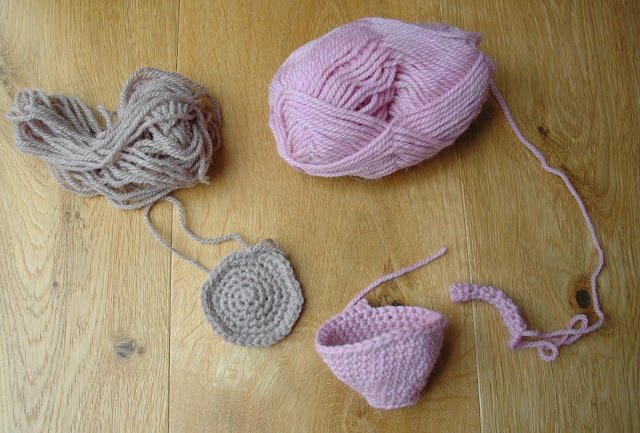 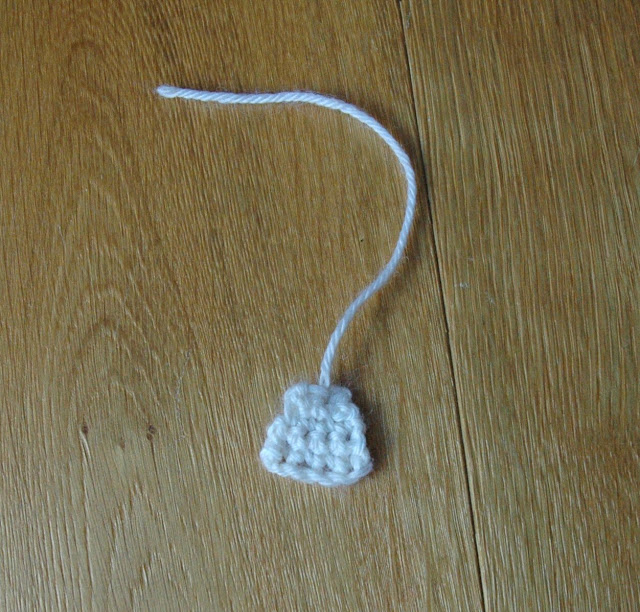 With the white yarn, ch5
Row 1: dc in second ch from hook and in each st across (4st)


Fasten off, leave a long tail, then hook that tail and bring it up through the middle of the top of the teabag to stitch into the cup.
Assembling the cup:


Fill the base of the teacup with pellets of some sort – I used baking beans. 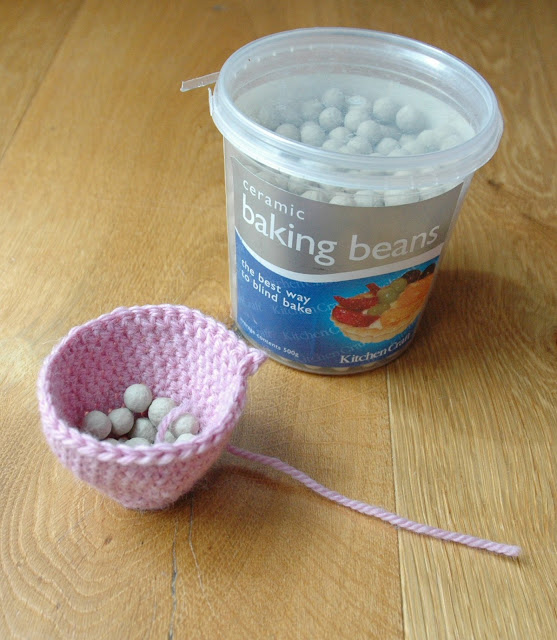 Fill the rest with toy stuffing, then top with the tea lid. Use the tea-coloured yarn to stitch the tea to the inside rim of the cup. Stitch the handle to the side. Finally, leaving the teabag hanging down a bit, stitch it to the top inside of the cup. 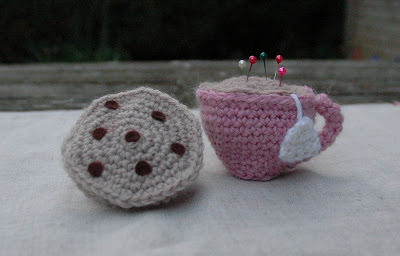 All this explaining has left me a bit peckish. I think I’ll go make a proper version of this tea n’ biscuit...
Any questions, comments or concerns, please don’t hesitate to email me! Happy crafting!

Email ThisBlogThis!Share to TwitterShare to FacebookShare to Pinterest
Labels: crochet