A week to recover...

Greetings lovely readers! I have been away too long. I am still recovering from last weekend’s birthday bash, our village May Day celebrations and a baking marathon. I love to bake, but it all got outta hand last weekend...

It started when I baked three dozen cupcakes for Bunny’s class and teaching staff to celebrate her birthday as well as surviving the stressful SATs exams held Monday to Thursday. We took the cupcakes to school on Friday and they were appreciated and enjoyed by all. I also baked five dozen sugar cookies for Little Flower’s pre-school stall at the village fête – luckily I didn’t have to embellish them, because they were for a cookie-decorating fundraiser.

Friday afternoon I baked the cake for Bunny’s birthday party on Saturday. Given that she was turning 11 and therefore is entering the Supremely Cool ranks, she and four close friends celebrated with a Happy Hour party at the highly scented and colourful Lush shop, where they played with bath bombs, moulded playdough-like soap into funny creatures, and made their own Comforter Bath Bars from scratch, to see what ingredients go into these scrumptious products.
So I came up with a fun idea for a cake. Cupcakes were old news, and little cakes shaped like round bath bombs were too obvious – half the bath bombs there look like cakes anyway. But when I was looking at the Comforter Bar they’d be making, I was struck by just how much it resembled a Swiss roll... 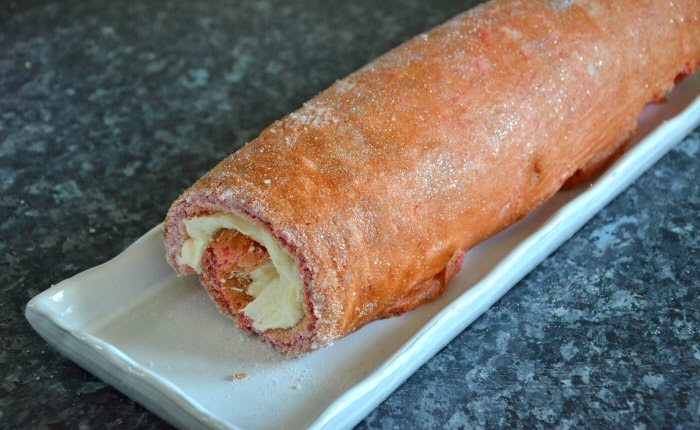 I made a traditional Swiss roll, following Mary Berry’s failsafe recipe. I added a deep pink food colour gel and made buttercream frosting to fill the cake (I decided against fresh whipped cream – no refrigeration issues). When sliced, it would reveal a fuchsia cake with white filling, just like the bath bar.

But now we must cue ominous, sinister music.

I dusted the cake with fairy glitter, then wrapped it tightly in cling film and hid it under a tea towel so Bunny wouldn’t see it. Tidied up and went to bed.

We’d been up a while, shared birthday presents with Bunny, had breakfast, and were getting ready for the afternoon before the party guests arrived at 4:30. I popped downstairs to discover that beneath the tea towel, under the cling film and all over the cake were tiny ants.

And not just one or two on the end bit that I could brush away and cut off the piece. Ants all over. The cake was ruined.

I don’t know how, I don’t know why. The kitchen was clean, no trail of sugar, no idea how the little Houdinis got through the cling film (but believe me, I called them a few more names after ‘Houdini’). All I knew was that no way on this green earth was I going to buy a supermarket cake to replace this!!! My fellow bakers will understand completely where I’m coming from...

When faced with moments like this, I get upset, but then very quickly I get very angry. Then anger turns to utter determination to conquer the situation and get the results I want. Ain’t nothin’ gonna stop me! Efficiency takes over, and in this case I grabbed a pen and paper, listed the few ingredients I had run out of, and gave the list to DH, telling him that I would fix this, if he could just pop out and get me these few things. And something chocolate. To keep me going.

(Hmmm, I wonder if this sort of attitude would work well on the Great British Bake-Off? Bet they never had a problem with ants. Hmph.) 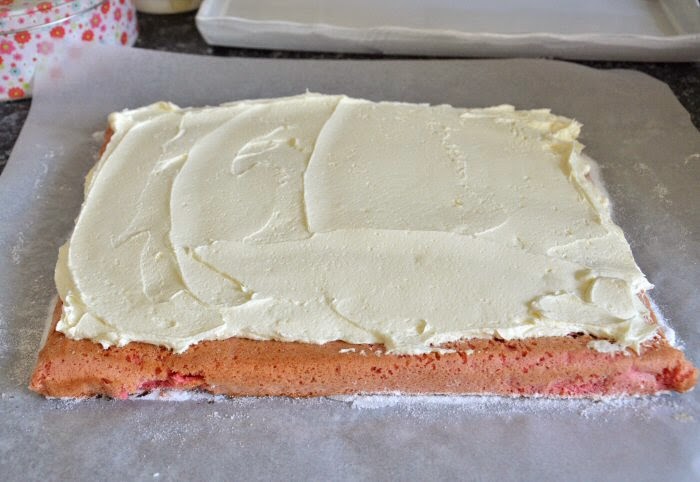 Half an hour later I was whipping up another cake (my beloved pink KitchenAid proved her worth yet again, I think I’d like to be buried with her) and it was even better, with a deeper shade of fuchsia. We had to tell Bunny what had happened, and reveal the joke Comforter Bath Bar cake since she was witnessing the minor chaos in the kitchen. In her optimistic, yet practical manner, she said, simply and in all honesty, “Well, it could have been worse. We could have discovered the ants when we cut into the cake at Lush.”

And that was that. Crisis averted. I love her so much it makes my heart ache. 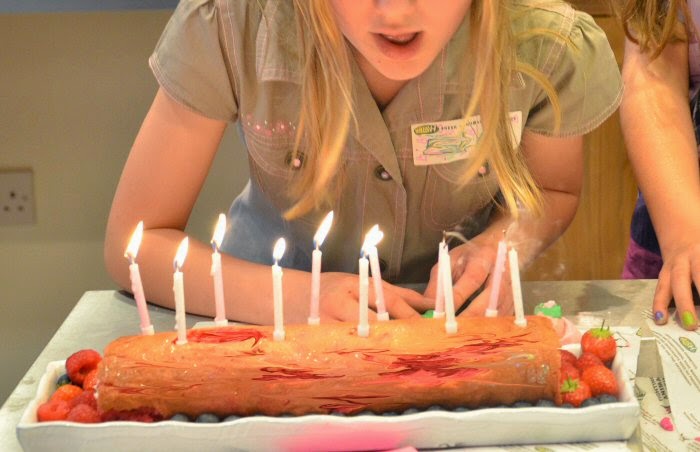 The cake was served right after they made the bath bars, and when it was sliced, the resemblance was obvious. I popped extra slices in the goodie bags alongside the bars, reminding each girl not to confuse the two – buttercream frosting would not be good in the bath!

Following the Happy Hour at Lush, we went over the road to Jamie’s Italian restaurant for dinner. But I had rung up beforehand to ask if the five girls could have their own table, with me and two mum friends sitting across the room enjoying our own meal. The girls felt like proper “big girls”, and we mums enjoyed some proper grown-up time and yummy food!

But I wasn’t finished baking, nosiree. On Sunday we had a wonderful time at the annual village May Day fête, with perfect blue skies and lovely community spirit. Little Flower was taking part riding on the pre-school float in the parade, dressed as a purple fairy with rainbow wings. Bunny was playing the role of the dragon in the traditional recreation of St George battling the dragon. As far as we know, she is the first female dragon in the 110-year-history of the fête! I couldn’t be more proud! “I will die a very dramatic death,” she said when chosen to play the role. And that she did: 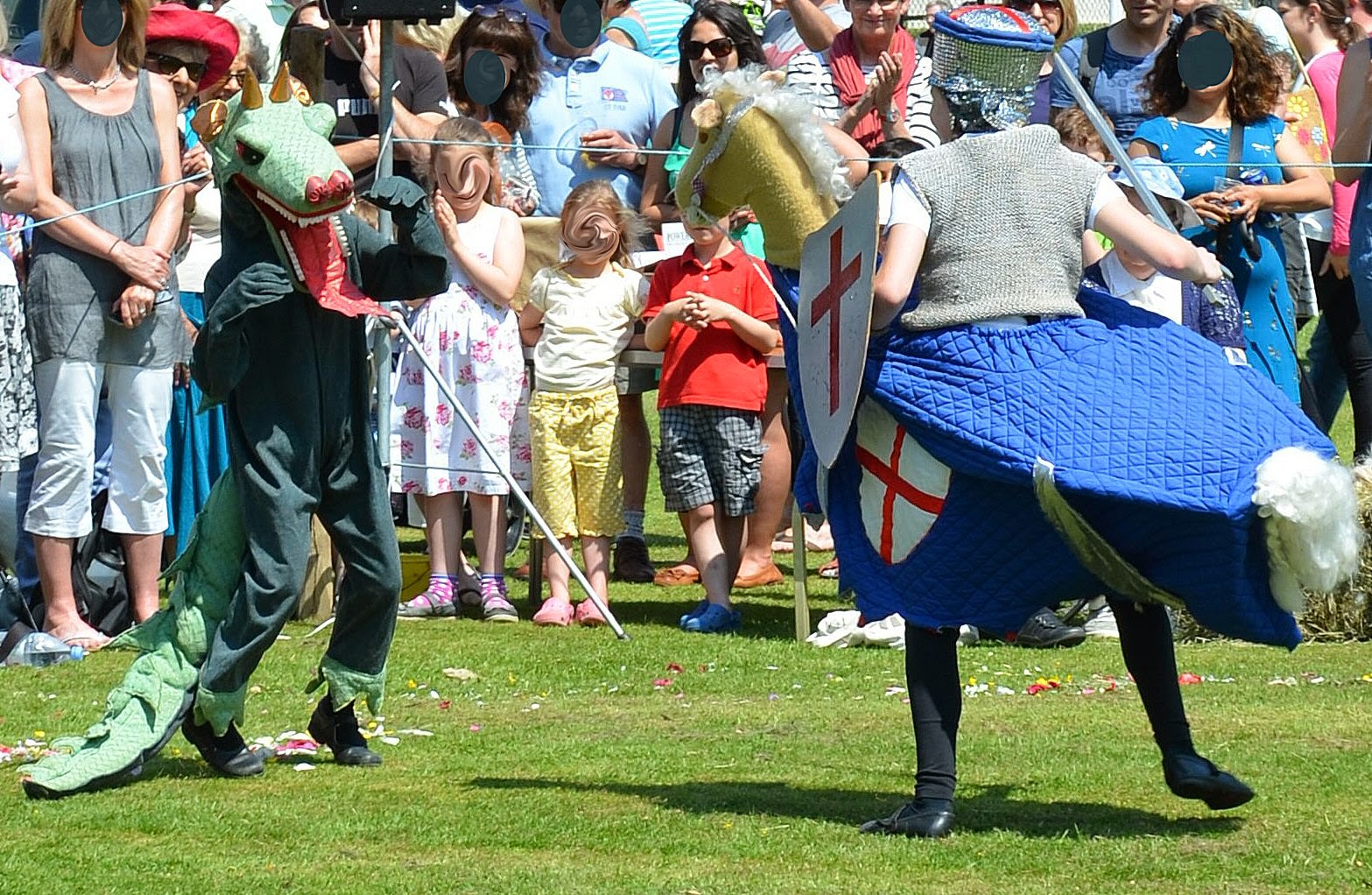 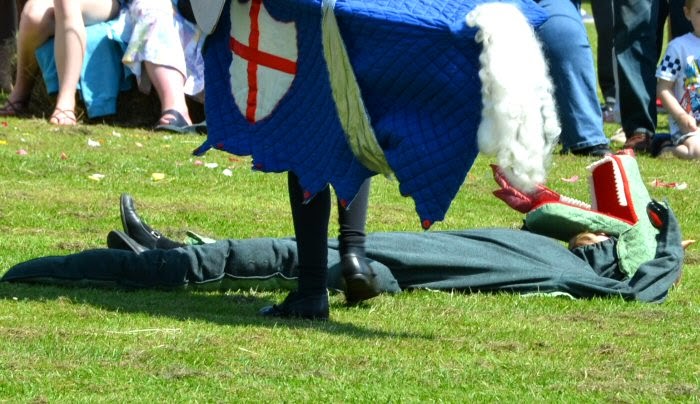 Because we ate most of the cake at the party, Sunday afternoon I baked her favourite lemon drizzle cake to have that evening after a barbecue. We sang Happy Birthday again and I watched her devour three-and-a-half pieces of cake! Little Flower had two, DH had, well, I stopped keeping track of who was eating what at that point. I just enjoyed being with my happy family!

But I’m done baking for a while.