...the absence of progress with current WIPs, despite not having started any new projects. A state of creative oblivion. Craft Limbo indicators include summer holidays, sunny weather, an increase of child presence in the home.


It’s not for a lack of desire to accomplish anything – oh no, I’m rather excited to continue work on my WIPs. But somehow, inevitably, as I gather the balls of yarn to do a few more blossoms for my bag, something distracts me. A child needing another snack (growth spurts, both of them! I feel like I’m catering for two rugby players, not young girls!), another load of post-holiday laundry to put on...I pop the yarn on the table, then suddenly it’s 10 p.m.! Then only one or two blossoms are made rather than one or two rows.
So for now I’m going to show you some more of my alphabet sampler. I managed to finish the letter D, and I realised that I should actually be posting details about this sampler after every four or five letters, or else I’ll be writing a short novel about the entire alphabet when it’s done! 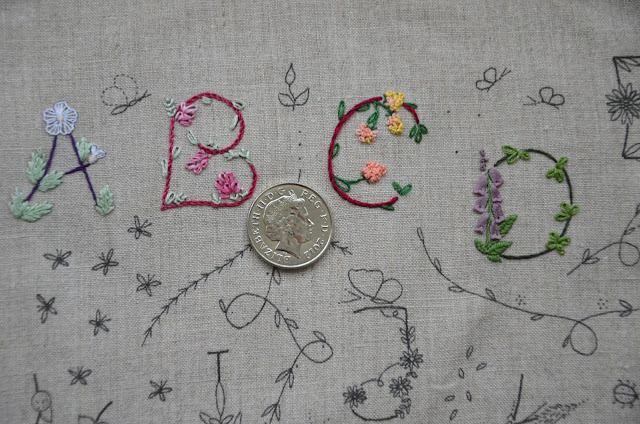 I added the ten-pence coin for size reference (US peeps: 10p coin is about the size of a quarter). Some of you will know these stitches, so look softly – some are new to me, and I know they’re not perfect, but I’m gaining good experience with this sampler, which is entirely the point of the project! To those of you who haven’t embroidered much, these are fun stitches to learn, and I’m happy to explain more via emails or in future posts if there is interest. Perhaps some tutorials down the line? 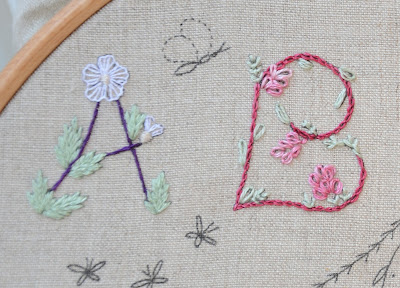 The letter A is done in stem stitch with one thread, the flower is worked in buttonhole stitch, the leaves are long and short stitches. B is a chain stitch with two threads, leaves are a mix of lazy daisy and fern stitches, and the flowers are lazy daisies, but I used some variegated floss for some colour interest. 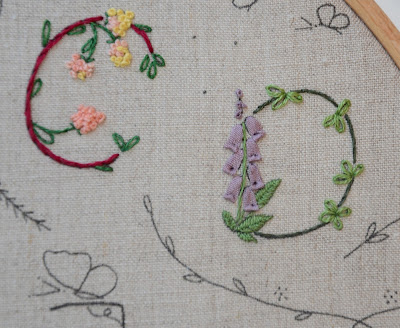 The letter C was done in stem stitch with two threads, more lazy daisy leaves, and the blossoms are French knots – but I chose to use three colours rather than one, a pale yellow, pale peach and a shade darker peach. The D is stem stitch one thread, but some leaves were done with the fishbone stitch – my first time doing this, and it was tricky. I seemed to succeed on the larger leaves, but the very small leaves, well, let’s just say they’re not perfect and leave it at that. Perhaps I’m mad to think a fishbone stitch would work on such a dinky leaf...
I decided to use silk ribbon for the blossoms, rather than the buttonhole stitch recommended in the instructions. I like how they turned out (except that, looking at the photo, I have to adjust the ribbon in a spot or two to conceal the needle hole - photos show you what the naked eye can't detect!) and I like reviving my ribbon skills. A few ribbon knots at the top, and I’ve got a pretty garden developing here!

Now, a confession: I spent the majority of yesterday firmly believing it was Friday. I’m serious. I was mulling over weekend plans, etc...Sometime in the afternoon my mother-in-law was talking to me about popping a card in the post, and I cautioned her that it won’t arrive in time because it’s nearly Sunday. Her puzzled look was my first indication that something was amiss. Then she had to actually tell me that it wasn’t Friday. Then she told me it was Tuesday. Nice. Then I’m sure she wondered why this grown woman staring blankly at her is caring for her grandchildren...
We’ve been home nearly a week now. Time to snap out of this post-holiday stupor! Time to get out of Craft Limbo as well. I’ve had it!

Watch out WIPS, I’m coming to get ya!