I woke this morning not to the crisp, bright Indian Summer I’d been dreaming about, but to a dull grey sky and streaming rain. The heat kicked on.

We stayed up much later than usual watching a film, so of course Little Flower was up in the middle of the night (and she *never* wakes in the night), so we were all rather grizzly this morning.

Bunny couldn’t choose between grey trousers or grey pinafore and tights for school, her hair wasn’t going right, and her rucksack was too heavy. And Little Flower decided today was the day she absolutely had to learn how to undress and dress herself completely on her own.

*sigh* Going to be one of those days. Time to bake. 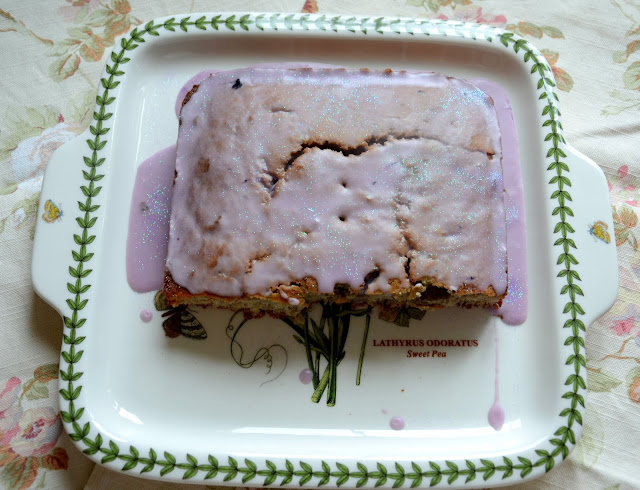 But why a photo of a garish, glittery, partially devoured cake? Read on...

I have an old recipe for a marmalade cake, but I don’t have any marmalade in the house. I do, however, have the very last spoonfuls of the very last jar of blackcurrant jam from Autumn 2012, which must be finished immediately to make room for this season’s jams, chutneys and preserves. So I did a few substitutions, and here is my Monday Cake, so named because it lifts one’s spirits on the dreary Mondays of life. 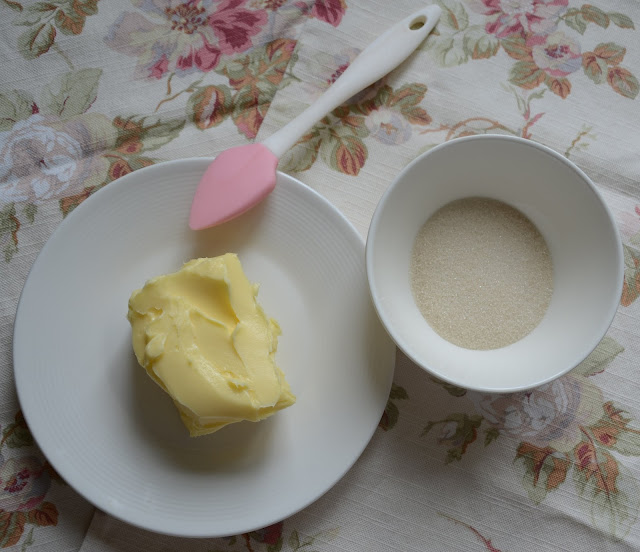 Mix together butter and sugar until very pale and fluffy. 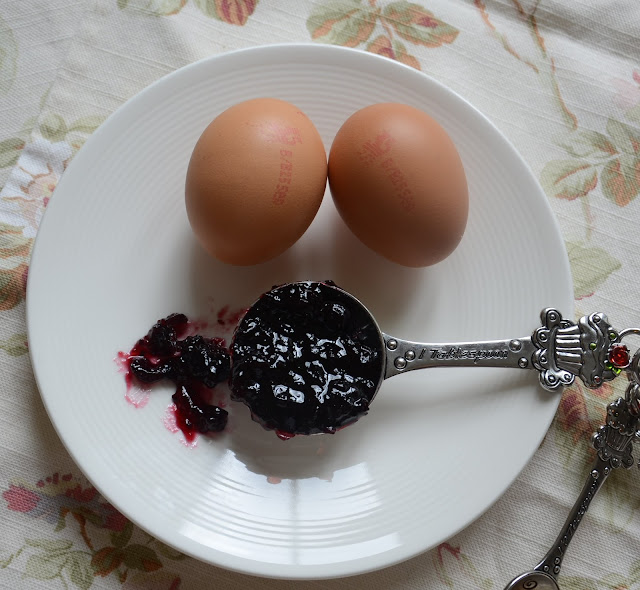 2 large eggs
3 Tablespoons jam (I’ve made this with orange marmalade in the past, and today with blackcurrant jam, but try whatever you have! We’ll be doing blackberry next, then raspberry...)
2 teaspoons orange zest (optional)

Add the eggs one at a time and mix well. Stir in the jam and zest. 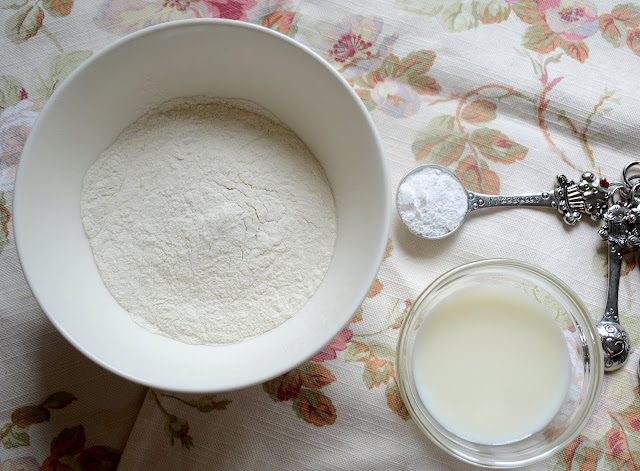 Mix the flour and baking powder together in a bowl, then stir gently into the cake mix. Add enough milk to make a thick batter – start with two tablespoons, then add the third if necessary. 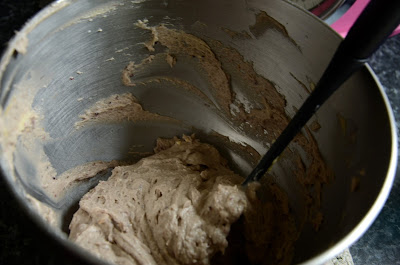 This isn’t the prettiest of batters, as the blackcurrant jam makes it turn an ill-looking greyish shade, but stick with it. The colour suited my Monday morning.

Pour into the prepared cake tin and bake for 25-35 minutes or until golden brown and a toothpick inserted in the centre comes out clean. 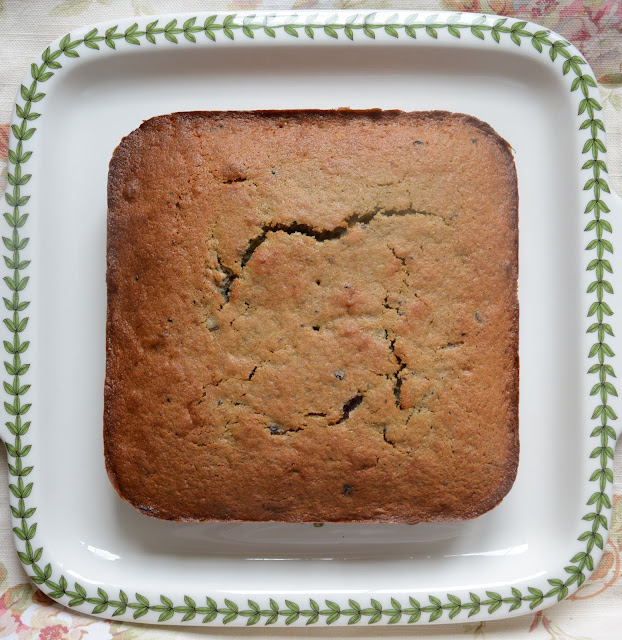 Leave to cool a few minutes in the pan, then turn out onto a cooling rack.

But when I reached into the large lower cupboard to get the cooling rack, I bumped a precariously positioned tub of Nestle hot chocolate mix, and of course, being Monday, the top popped off and fine chocolate powder flew everywhere.

Inside, outside, all over everything else stored inside that large lower cupboard. It took me an hour to clean the mess. An hour. Clearing out, wiping, scrubbing, dusting, vacuuming, mopping. Putting everything away.

This cake is perfect to serve with a cup of tea, just as it is. But today is a very *Monday* Monday, so we decided to embellish a little to cheer me up.

Icing sugar, milk, food colouring. Mix in small quantities until there is enough to smother your cares away the cake. Sprinkle with fairy dust. 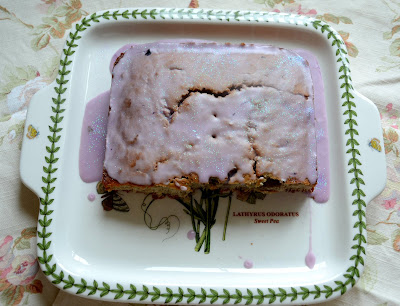 Then, instead of reaching for the camera to take photos of this pretty creation for my blog, I reached for the cake knife, and my little three-year-old and I enjoyed the blackcurrant-flavoured treat, complete with fairy dust, well before the hour that any sensible person should be eating cake. 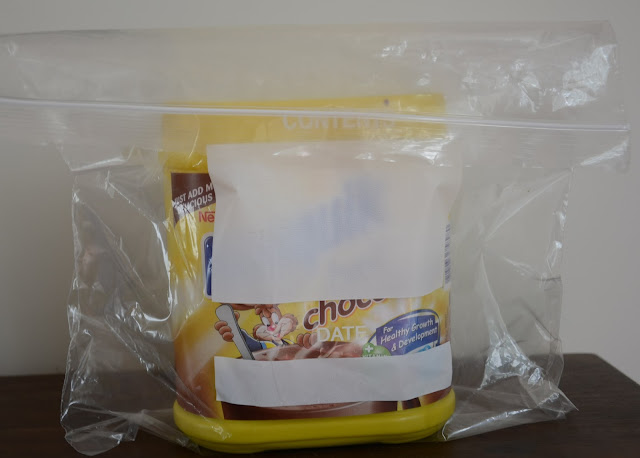 And remember: Store your hot chocolate mix in zip-lock bags.

Email ThisBlogThis!Share to TwitterShare to FacebookShare to Pinterest
Labels: baking