One of my favourite children’s books, when I was young and now for my children, is “Green Eggs and Ham” by Dr. Seuss. I remember reading it for the first time as a little girl, intrigued by the story of someone intimidated by trying something new.


Isn’t it fun to try new things! I love discovering new flavours, and I suppose that extends to life in general – seeing new places, meeting new people. There is so much to experience in this great big world, and so many friendly people who want to share their stories and creativity. I think Dr. Seuss was encouraging children to be adventurous and not judgmental – not just with food but with life – when he wrote this book.
I was reading this story to Little Flower a few days back, and an idea sparked.


I found a scrap of white linen, grabbed my fine-pointed Sharpie pen, and got down to business. 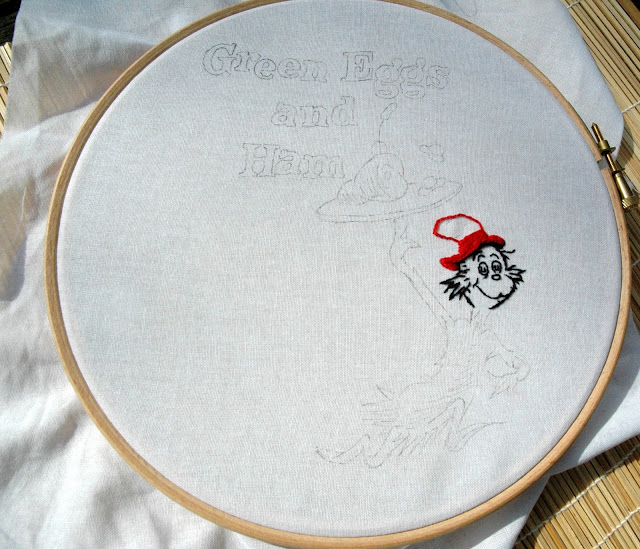 I have at least four embroidery projects in the works...wait, five, I just thought of another...but I opened the book and just wanted to stitch a little testament to keeping an open mind.
I’m not sure if my embroidery skills are up to this project, with all that fill stitching, but I’ll keep you posted with my progress, warts and all! This will be a good learning project, I suspect...


I’m lucky that my children aren’t picky eaters. I don’t have to find kid’s menus when we’re out, and they usually try new foods without fuss.
But ask any parent who has a child like this, and they are likely to say that it’s not just down to luck. An action plan for new foods has been in place since Bunny was a baby trying her first solids. I always encourage the girls to try new foods, and I have never treated certain foods as “yucky” – but I also have always given them the option of declining a new food if they don’t like it, after they have actually, properly tried it.


I don’t make a big deal about it. I just say, “Take a bite of this, if you like it there’s more, if you don’t, spit it out into this napkin. No big deal.” I mean really, what’s the worst that could happen? I’m not asking them to eat a poisonous sea urchin or anything, so it really isn’t a big deal. I know young palates tend to dislike bitter flavours, so I don’t serve them a bowl of boiled spinach! Nine out of ten times, the relaxed approach works wonders.
At age six, Bunny even tried escargot when we were in France, then said calmly, “It was chewy. I’m glad I tried it, but I don’t think I’ll have any more.” (I secretly think she just wanted to tell her friends she ate a snail while on holiday!) That was that, and she went on to eat a full meal of her own choosing.


My mother is visiting from America for the half-term holiday this week. Let the good times roll! Bunny and I are taking her shopping in London in a few days, and Bunny already is telling her grandmother about Yo! Sushi and her favourite dishes to grab off the conveyor belt...I think we’ll read “Green Eggs and Ham” to Grandma before we go!
Now I’m getting back to the red floss and that hat! Enjoy the holiday weekend!